The GRP Theory was proposed by Zhou-Feng Chen in a 2007 publication in accordance with Labeled-Line Theory to account for a gene coding for GRPR, that when knocked out or antagonized, prevented the transmission of an itch signal to the dorsal horn. When exposed to several pruritogens, mutant GRPR (gastrin-releasing peptide receptor) mice lacking this receptor were shown to scratch significantly less than wild type mice (Sun and Chen, 2007). With further experimentation failing to display any pain processing within this neuronal subset, the evidence suggests a distinct labeled-line circuit exists primarily for the transmission of itch. More recently, the discovery of the itch neurotransmitter Nppb (Naturietic Polypeptide B) has also been shown to result in significantly decreased itch response when this circuit is interrupted. ( Hoon and Mishra, 2013 ) In the publication by Hoon and Mishra, GRP was suggested to indeed be a component of an itch circuit, but may instead operate further downstream of the Nppb transmitter. 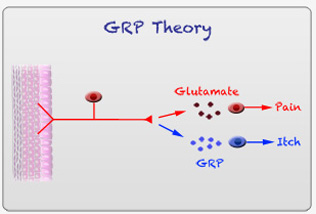