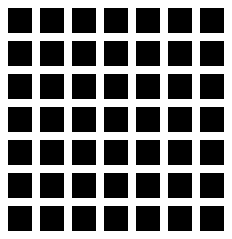 When viewing the Hermann Grid, you will probably notice the faint dark spots that appear at the intersections of the white lines.  But why do they appear?  And why do they disappear as soon as you look directly at them?  Both answers lie in how the retina converts visual stimuli into electrical impulses.

Posterior neurons convert light stimuli into electrochemical messages that are sent to anterior neurons.  The most anterior cells are called ganglion cells.  Each ganglion cell receives information from many cells and must decipher what is important and how it will transmit that information.  This communication results in unique organization of the ganglion cell known as Center/Surround.

The center/surround organization of ganglion cells explain why the iridescent dark spots appear. 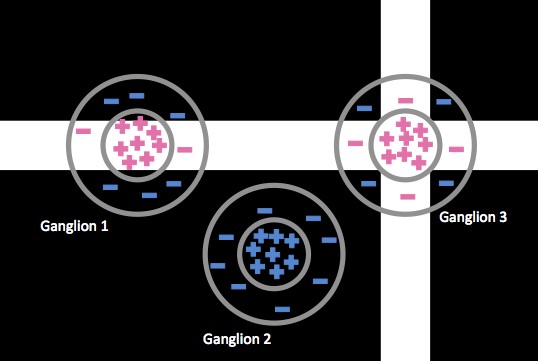 Ganglion 2 is not exposed to light at all.  The center is not excited and the surround is not suppressed.  Because no input is stimulated, the black background appears dark.  Ganglion 3 has twelve of sixteen inputs exposed to light.  Eight of those stimulated inputs are excitatory; however, four are inhibitory.  There is a net of four excitatory inputs stimulated.  The intersections appear darker than the lines because there is less net excitatory stimulation.

But why do the dark spots disappear as soon as you look directly at them?

Our central vision is sharp and clear, allowing us to resolve details with great accuracy.  Ganglion cells close to the fovea have a very small receptive field, with fewer inhibitory inputs.  Therefore, at the fovea, there is less inhibition of the center by the surround, and the dark spots disappear.