It wouldn’t be an authentic American summer without a visit from our itch-inducing friend the mosquito. Across the U.S. people spend a big chunk of their summer vacation itching away at the pesky welts we get in response to mosquito bites.Worldwide there are over 3,000 species of mosquitoes, 176 of which are recognized in the United States.[i] 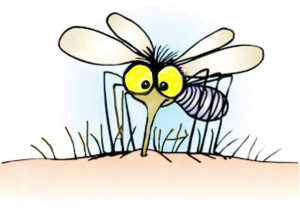 These pesky insects, members of the genera Anopheles, Culex, and Aedes, are the ones that leave us with itchy welts during the summer months.[ii]  Female mosquitoes possess a long, piercing proboscis enabling them to pierce human skin in order to obtain human blood proteins, which they require for viable egg production.1,[iii]  In order to bypass our coagulation response when extracting our blood, female mosquitoes deposit their saliva, containing several anticoagulant compounds, as they pierce our skin.  These anticoagulent compounds and up to 19 others contained in the mosquito salivary extract, cause us to develop an immune response leaving us itching for up to four days.[iv]

Most of us can’t remember the first time we were bitten by a mosquito, though the first bite we experienced is the one that counts most.  This inaugural mosquito bite marked the introduction of mosquito saliva allergens to our immune system, sensitizing us to these compounds; in all repeat bites, sensitization is key recruiting immunoglobulins (IgE and IgG) to the site of the bite.[v]  IgE and IgG act to degranulate cutaneous, connective tissue mast cells, typically associated with the release of histamine, a pruritic substance commonly implicated in allergic itch.

Recent studies have shown, however, that the allergic itch we experience during a mosquito bite is sensed through a histamine-independent peripheral pathway, where mast cells induce itch by releasing a substance other than histamine.[vi]  Substances released by mast cells are then sensed by peripheral neurons causing a cascade of signals to the central nervous system.

At the spinal cord, signals from peripheral neurons are interpreted (this is where research in the Ross Lab is focused- for more information check out our current projects at http://www.rosslab.neurobio.pitt.edu/research) and sent to the brain where signals for an itch response are elicited.  This accounts for our scratching in response to mosquito bites.  The curious thing about these itchy bites isn’t how they happen, but that some people are more susceptible to bites than others.  Research has shown that certain behavioral modifications, including scents produced by or added to a person, may increase the attractiveness of an individual to mosquitoes.  Recently, studies have also suggested that there may be an evolutionary component to the pattern by which people are bitten.  Preliminary findings suggest that people with fewer defenses, the young, sick, and elderly, are more likely to be targeted than those with well developed defenses.3

In the U.S. we are curious about our susceptibility to these pesky insects so that we may simply avoid being itchy; globally, however, this research could improve prevention techniques for deadly diseases carried by mosquitoes, including the family of Plasmodium parasites which are known to cause Malaria.[vii]  Although millions of Americans experience mosquito bites during the summer months, no effective treatments are available to attenuate the itchy response they elicit.  It seems for now we will have to accept our itch-inducing friends as a pesky hallmark of the American summer!

[iv] Peng, Z., Li, H., Simons, F.E.R. “Immunoblot analysis of salivary allergens in 10 mosquito species with worldwide distribution and the human IgE responses to these allergens.” The Journal of Allergy and Clinical Immunology 1998; 101:498-505.