Postherpetic itch is an itch that occurs in response to the herpes zoster virus, or shingles.  The virus has the ability to replicate in nerve cells and be carried to the skin via the nerve cell’s own transport system and thus infect the corresponding area of skin associated with the nerve, or dermatome. Due to the infection’s affecting only a particular set of nerves and subsequent dermatome, the skin rash seen in shingles is much more localized compared to the rash seen chicken pox.4 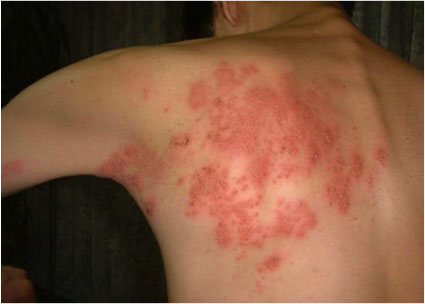 The shingles rash typically subsides in three to four weeks, and the person recovers. But there are two common complications of shingles affecting up to 30% of people with shingles: 1) postherpetic neuralgia (an aching, burning, or stabbing pain) that most commonly afflicts people 50 years or older; and 2) postherpetic itch. The underlying mechanism causing postherpetic neuralgia, or pain, is thought to be spontaneous pain receptor activity and can be treated with lidocaine skin patches (local anesthetic), tricyclic antidepressants, anticonvulsants, and opioid painkillers.5,6

Though a less common aftermath of shingles, postherpetic itch is debilitating and more difficult to treat than postherpetic neuralgia. The underlying mechanism of why the itch persists is unknown. However, in cases of postherpetic itch, in the nerves afflicted with shingles, 95% of the sensory fibers have died while the 5% that remain are hyperactive. 5, 7 One possible explanation for the extreme itching could be that the 5% of nerve fibers remaining alive are the ones that mediate itch.  Another possibility is that the hyperactivity of the remaining 5% of the nerve fibers is being misinterpreted at some point as the sensory information is relayed to the brain.7, 9 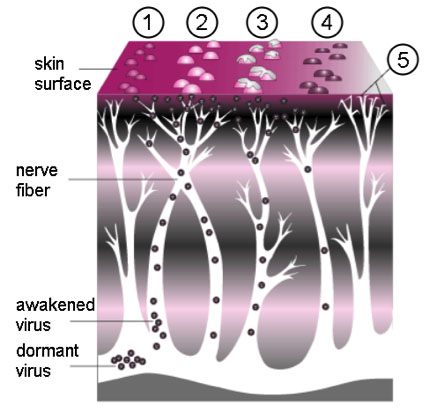 The Progression of Shingles: “A cluster of small bumps (1) turns into blisters (2) that resemble chickenpox lesions. The blisters fill with pus, break open (3), crust over (4), and finally disappear. Postherpetic itch and neuralgia (pain) are caused by damage to the nerves (5).” http://www.fda.gov/fdac/features/2001/301_pox.html

Sometimes we deal with itch that just won’t seem to stop. This is especially true in patients suffering from shingles whose skin sensory neurons have been damaged. These patients scratch for relief, but in desperation injure themselves without being aware of it.7  In some documented cases, a relentless itch has persisted for years, resulting in serious injury as the patient repeatedly scratches the same area of the body.  In one case, a 10-year-old boy’s neck was damaged and in another case a 40-year-old woman’s shoulder injured, all from their own scratching.10, 11

Treating itch is more difficult than treating neuralgia or pain, but specific treatments are now being developed.  Currently, treatment consists of topical local anesthetics to numb the skin at the location of the itch. This treatment has risks: when an area of skin is numb to itch, it is also numb to pain, leaving the patient unaware of, and therefore exposed, to injuries.8

This lack of a specific treatment for postherpetic itch can be a major problem. Many patients get relief from topical anesthetics, but others with severe itch continue to suffer. An extreme case of postherpetic itch, documented in 2002, illustrates how far a patient may be driven by relentless itch. The shingles virus caused nerve damage and skin desensitization in a 39-year-old woman. Because she felt itch but not pain, she painlessly scratched right through her skull into her brain, despite her head and her hand being swathed in bandages as a way to control scratch-induced damage.9 In an interview with Atul Gawande, she said, “I don’t normally tell people this, but I have a fantasy of shaving off my eyebrow and taking a metal-wire grill brush and scratching away.”13 (Read Her Full Story) 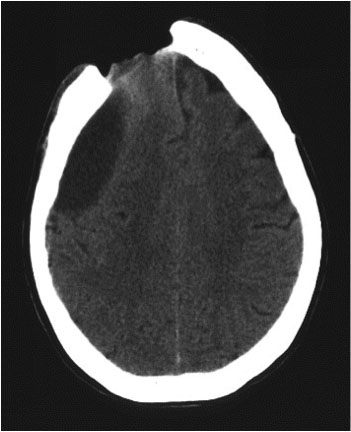 CT Scan of 39-year-old woman’s skull:  The intensity of her itch was so great that she scratched through her skull. Oaklander AL, Cohen SP, Raju SV. 2002. “Intractable postherpetic itch and cutaneous deafferentation after facial shingles.” Pain.

When it comes to research, itch and the treatment of itch has been sidelined, with most of the effort going to understanding and alleviating pain. In spite of some similarities between itch and pain pathways, medications that alleviate pain are not as effective in relieving itch. Research is currently being conducted on potential targets including cholecystokinin, PAR2 and GRPR antagonists, as well as a new oral kappa-opiod receptor agonist, nalfurafine, which is in clinical trial.12 But much more research is needed to investigate the neural circuitry and mechanisms of itch and eventually find innovative treatments for chronic itch.