Evidence arguing against a strictly specificity theory model, being that some pruritoceptors populations were found to additionally respond to algogens (Johanek et al., 2007; Namer et al., 2008; Liu et al., 2009), it was hypothesized that an “overlap” of stimuli detection amongst a nociceptor population may be a possible explanation. This idea, Selectivity Theory, in accordance with labeled-line theory, suggests that specific and identified populations of “itch-selective” neurons ( Andrew and Craig, 2001 ) can detect pruritogenic, as well as nociceptive stimuli, perhaps with the ability to differentiate the two signals. Evidence comes by Liu et al in 2010, with the finding that removal of vesicular glutamate transporter type 2 in nociceptors (a neural component of pain processing) leads to decreased pain responses and increased itch responses ( Lagerstrom et al., 2010;Liu et al., 2010). This evidence suggests that pruritoceptors operate closely to detect both itch and pain stimuli, but when pruritoceptors are predominantly activated, or the neuronal pathway for sensing pain/inhibiting itch is disrupted, an itch response results. Additionally, a predominately painful stimuli may suppress or inhibit itch activation, resulting in a painful response (Liu et al., 2010;McMahon and Koltzenburg 1992). This notion of pain inhibiting itch accounts for the ability to soothe an itch by scratching, consequently inhibiting the itch response. Coinciding with this hypothesis of inhibition by nociceptor-only neurons, we can also account for the role of the B5-I interneuron as a possible mechanism of itch inhibition (Ross et al., 2010), perhaps as the result of the stimulation of the interneuron by way of “low grade” painful stimuli. 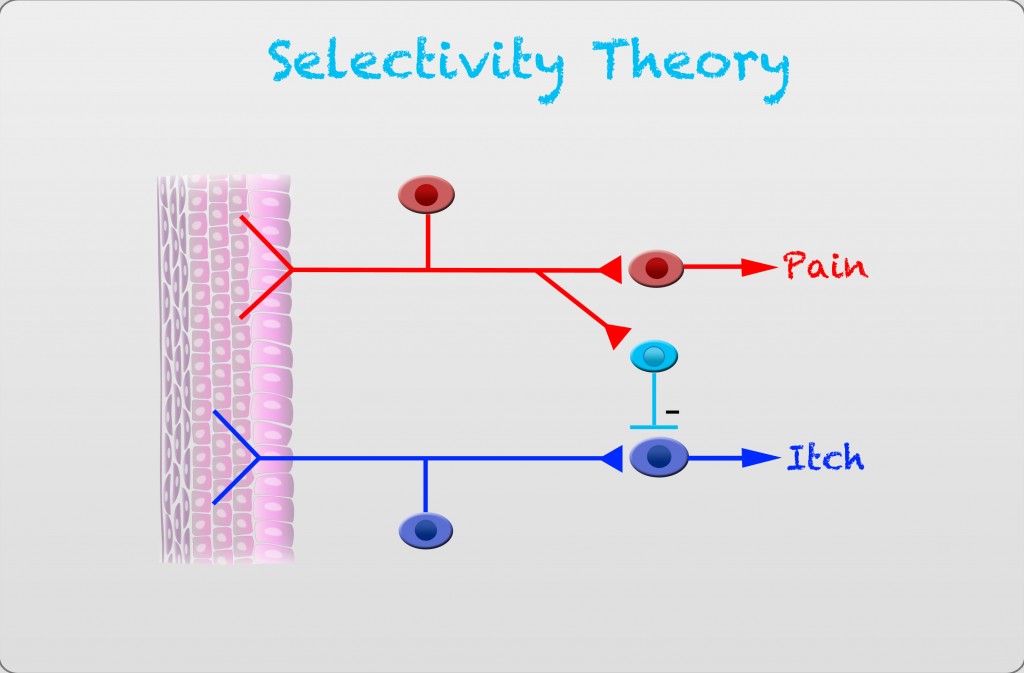