Still controversial, the very idea of “itch neurons” functioning separately from “pain neurons” has furthered the case with the recent discovery of the neurotransmitter Natriuretic Polypeptide B (nppb). In a recent publication in the journal Science, Santosh Mishra and Mark Hoon have expanded the argument for individual pain and itch circuitry by displaying the expression of this polypeptide neuromodulator in a subset of somatosensory neurons containing the TRPV1 ion channel.

Release of this transmitter from neurons in the dorsal root ganglion was shown to induce scratching behavior in mice, even when injected intrathecally without the activation of the peripheral neurons themselves in both wild type and Nppb -/- mice. Binding of this modulator with the Nppb-recetor-expressing cells (Npra) was also shown to be essential in determining a scratching response where abolished Npra receptor mice displayed no behavioral response when exposed to pruritogenic agents.

Additional evidence also reconsiders the role of GRP, once believed to be the primary neurotransmitter released by sensory neurons. Hoon and Mishra suggest this peptide functions further downstream in the circuit and still contributes to the transmission of itch. This information begins to introduce a crude model of dedicated itch circuitry complete with its own operating novel transmitters and receptors. Ultimately, these findings advance the argument for the functional separation of pain and itch circuits. 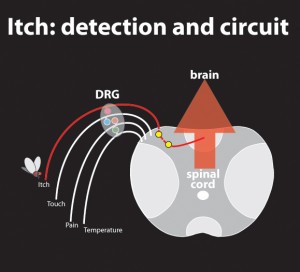