Almost two centuries ago, Johannes Muller proposed the idea of “specific nerve energies”. Von Frey applied this idea to touch versus pain, calling it the Specificity Theory. Here this idea is extended to itch versus pain.

Von Frey also developed the Intensity Theory of itch versus pain. These theories, as well as the Pattern Theory and the first description of the still popular Selectivity Theory, are described in a great review article by McMahon and Koltzenburg.

The Wheel Theory was proposed by Graham and Goodall in the 1950’s to explain how a pinprick could inhibit itch. This model raises the idea of tonically active neural circuits in the spinal cord whose disruption blocks itch. 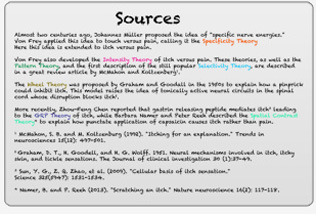