Pain and itch warn of us of physical harm and trigger the appropriate reflex – withdrawal and scratching, respectively – to minimize our exposure to noxious agents. Despite the fact that pain and itch are unpleasant, it is clear that these sensations are protective, alerting us to a hot flame or a harmful parasite. 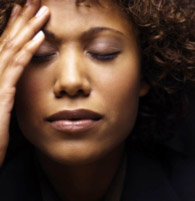 Want proof? Look no further than the example of people with a rare genetic condition called congenital insensitivity to pain. People with this condition feel neither pain nor itch and rarely live beyond thirty, succumbing to injuries, infection, and premature death. So these aversive sensations are critical for survival. Most people, however, have the opposite problem — too much pain or itch!

Unfortunately, chronic pain and itch are widespread conditions, affecting as many as one in five, and treatments generally don’t work. That’s why we want to gain a better understanding of the neural basis for pain and itch. We hope that this research will lead to new therapies to help the millions of people worldwide who suffer unnecessarily.

Pain and itch are initiated by sensory neurons that transmit information from the periphery to the dorsal horn of the spinal cord. Incredibly, we have not yet identified which neurons mediate itch and which mediate pain. In fact, the very idea that “itch neurons” and “pain neurons” are distinct is highly controversial. Many people think that the same neurons are capable of triggering both sensations, depending on the pattern or the intensity in which they fire. But arguing against this idea is evidence that comes from recordings of individual nerve fibers in humans whose activity corresponds to the subjects reporting—“hey, that feels itchy”. Importantly, when you drive these neurons to fire more often, the subjects don’t feel pain, just more itch, strongly suggesting that at least some sensory neurons are wired in such a way that they specifically elicit itch sensation.

A key difference between pain and itch is location—itch is perceived at the very surface of the skin, whereas pain can be elicited from almost anywhere in the body. It follows therefore that the salient feature that distinguishes neurons that mediate pain from those that mediate itch is their peripheral location and central connectivity. We are trying to map these circuits and figure out exactly which neurons (both in the periphery and in the spinal cord) are responsible for itch, which are responsible for pain, and how these circuits work. 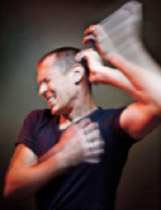 Have you ever discovered that ‘sweet spot’ when you are petting a dog: suddenly it starts moving its leg in a repetitive scratching motion—you’ve just triggered a scratch reflex! Likewise, if you accidentally touch a hot stove, you will instinctively pull your hand away before you even realize that the stove is hot. Both of these are reflexes that are mediated by the spinal cord. What this means is neural circuits in the spinal cord have ‘decided’ whether you are experiencing itch or pain, and they are mounting the appropriate behavioral response.

Actually, this discrimination between itch and pain can be pretty tricky. Lots of chemicals will cause itch if you put them on intact skin, but a painful response if they are applied to broken skin. How does your body figure this out?

How does your body distinguish between these two sensations?

The first clue comes from our own everyday experience: if you have an itch, one of the only things that makes it go away (at least temporarily) is scratching; that’s why we scratch. Studies using human subjects have revealed that itch can also be reduced by application of heat, cold or pain-inducing chemicals. Furthermore, this type of inhibition by so-called counter-stimuli is not limited to itch—cold lessens the sting from a bee whereas gentle rubbing reduces the unpleasant tingle of bumping one’s ‘funny bone’. A key feature of this inhibition between sensory modalities is that counter-stimuli can work at a distance, several centimeters away, suggesting that central neurons (probably those in the spinal cord) are involved in mediating this effect. This cross-inhibition between a variety of somatosensory modalities may function to sharpen sensory acuity just as, for instance, inhibition between red- and green-sensitive neurons in the retina improves color discrimination.

Inhibition between somatosensory subtypes may be particularly important for pain vs. itch to help determine the appropriate behavioral response. If only a small subset of predominantly itch-mediating fibers are activated by a mosquito bite, itch may dominate over pain and elicit scratching, whereas if a larger subset of predominantly pain-mediating neurons are activated by stepping on a sharp stone, pain may dominate over itch and trigger withdrawal.

Our lab is interested in studying the circuits that underlie this cross inhibition, and it looks like we may have identified some of the neurons that are involved.

How did we find them? Here’s the story

We were studying the function of a transcription factor (a protein that regulates which genes are expressed) that determines the formation of the nervous system during development. In particular, we were studying one called Bhlhb5, and when we generated (using genetic approaches) mice that don’t express this transcription factor, the result was that they are abnormally itchy. This effect seemed specific to itch because the pain sensitivity in these mice is normal. Thus, Bhlhb5 is required for normal itch sensation.

Since Bhlhb5 is expressed in a lot of regions of the nervous system, it wasn’t immediately clear which neurons were mediating this abnormally elevated itch. So to get at this question, we selectively got rid of Bhlhb5 in specific regions of the nervous system. What we found was that the abnormal itch is due to the loss of Bhlhb5 in inhibitory neurons (as appose to excitatory neurons) that reside in the dorsal spinal cord. We call them B5-I neurons (for Bhlhb5-expressing, inhibitory neuron)

Next we wondered, what goes wrong when Bhlhb5 is missing from these inhibitory neurons in the dorsal horn? To look at this, we made a mouse that allowed us to see the B5-I neurons by virtue of the fact that they express, as a result of our genetic manipulations, a green fluorescent protein in B5-I neurons. Once we did this, it became clear that B5-I neurons are selectively dying in mice that are missing Bhlhb5. So Bhlhb5 is required for the survival of B5-I neurons. Furthermore, since mice lacking B5-I neurons have elevated itch sensation, this implies that the normal function of B5-I neurons is to inhibit itch.

Why are these findings important?

First, they show for the first time that loss of inhibition results in elevated itch. While this notion is well-appreciated in the context of pain, it was not clear, prior to our studies, that this the principle applied to itch. This discovery means that drugs that increase inhibition in the spinal cord may be effective to treat chronic itch conditions.

Even more importantly, this work identifies the first inhibitory neurons within an itch circuit. This is great news, since we will now be able to use these B5-I neurons as an entry point to figure out the rest of the itch circuit!

So why do we have inhibitory neurons that inhibit itch sensation? One of the possibilities is that these B5-I inhibitory neurons are the ones that normally mediate the inhibition between pain and itch. In other words, when you have an itch and you scratch it, maybe the scratching causes the activation of B5-I neurons, which in turn inhibit itch. This is the hypothesis that we are testing now.

Dr. Sarah Ross was featured on Pitt Medcast, a University of Pittsburgh Medical School Podcast. Listen to her discuss the circuits of pain and itch in that podcast, featured below!

Here are some great reviews for further reading.

Pain and itch: insights into the neural circuits of aversive somatosensation in health and disease.

Neuronal circuitry for pain processing in the dorsal horn

Central sensitization: Implications for the diagnosis and treatment of pain

An exceptionally well-written and interesting review that makes a very strong case for the idea that plasticity within neural circuits of the spinal cord is responsible for chronic pain.

This review details how somatosensory information may be modulated by cross-inhibition between modalities.