Wheel Theory was proposed in a publication by Graham and Goodall in 1950 to account for the inhibition of itch by scratching. Taking this one step further, the idea of a “wheel” type circuit was hypothesized to also account for the discovery that a pinprick is capable of inhibiting itch. This they believed, was the result of a wheel type circuit being interrupted by the painful stimuli and subsequently inhibiting itch. It was also assumed that the level of stimulus intensity was proportional to stimulus response, suggesting that a more intense stimulus (pain) was required to overcome the wheel circuit and inhibit the less intense (itch) stimulus. 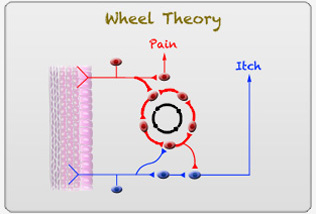